The details of state funding for public education can be mind-numbing; they take up more than 40 pages of closely-spaced type in the proposed budget bill. Those details are known and understood by only a relative handful of individuals in and around state and local governments.

State financial assistance for K-12 is provided in four basic categories: Standards of Quality, Incentive Programs, Categorical Programs, and Lottery Proceeds. The Standards of Quality (SOQ) category is, by far, the largest, constituting more than 80% of the total each year. This article is a high-level overview of SOQ funding and a subsequent installment will cover the other aspects of state funding.

The Virginia Constitution directs the General Assembly “to seek to ensure that an educational program of high quality is established and maintained.” (Article VIII, Section 1)

It is important to note that the constitution does not attempt to define what should constitute such a system. Rather, it requires the following steps to be taken:

The SOQ funding methodology was developed in the mid/late 1980s and has remained largely in place since then. The following policy decisions form the basis of the methodology:

The Appropriation Act sets out various accounts, or categories, for the SOQ, each of which has a line-item appropriation. The largest category is basic aid, which includes the funding for the 51 professional staff per 1,000 pupils required by the SOQ, along with support costs. With some exceptions, the basic approach is to calculate a division’s total cost related to SOQ, using statewide prevailing costs and the division’s average daily membership. With that total cost in hand, the amount that the state will provide toward this total cost is determined by the locality’s composite-index score.

Some costs have an established standard. Personnel fringe benefits would be one example. Another example would be textbooks. The proposed budget bill stipulates $132.38 per pupil for textbooks.

For those items for which there is no established standard, primarily salaries, the formula uses “prevailing cost.” That amount is calculated “using the ‘linear weighted average’, a weighted average giving greatest weight to division costs closest to the median cost (up to a weight of 5), and least weight to division costs closest to the highest and lowest outlying values (down to a weight of 1).” Based on this calculation, the proposed budget bill sets out the following “statewide prevailing salary levels”:

Thus, the prevailing cost for an elementary school teacher is the same in Lee County as it is in Virginia Beach. As an overview of SOQ funding dryly notes, an individual school division’s “actual costs can be above or below the linear weighted average values used for SOQ funding.”

It needs to be noted that the proposed budget bill does provide that “cost of competing” adjustments of 9.38% for instructional personnel and 18% for support personnel be applied to the cost of school divisions in Planning District Eight (Northern Virginia) and the counties of Accomack and Northampton. (The Eastern Shore counties had not been included in this provision in previous Appropriation Acts.) Furthermore, it provides that the prevailing costs for school divisions bordering Planning District Eight be increased by 25% of the cost of the competing adjustment provided for Northern Virginia divisions. (The localities eligible for this lower cost-of-competing adjustment are the counties of Stafford, Fauquier, Spotsylvania, Clarke, Warren, Frederick, and Culpeper and the cities of Fredericksburg and Winchester). As a result, the funded cost for an elementary teacher in Fairfax County is $59,421 and, in Spotsylvania, $55,324.

To determine a division’s cost in a SOQ category, or account, DOE calculates the instructional costs, using the staffing standards set out in the SOQ and the prevailing cost. It then calculates the costs for any factors related to that category.  The SOQ costs are funded in several categories, including basic aid,  textbooks, special education, gifted education, etc. Each category has its own formula. Basic aid is the largest and most complex category. The total cost of all those categories is the total SOQ cost.

An example of the basic aid methodology best illustrates the process. Based on its projected average daily membership, the basic aid formula determines that Spotsylvania County would have 616.01 funded elementary school teachers at a funded cost of $34.1 million in the first fiscal year of the next biennium. That sort of calculation is made for each of several categories of instructional personnel, as well as for equipment, transportation, and support personnel to arrive at a total SOQ cost for basic aid of $156.5 million. Dividing that amount by the projected ADM and adding in a couple of adjustments yields a per-pupil allowance for basic aid of $6,962. When that amount is multiplied by the projected March 31 ADM, the total cost of basic aid comes to $161.9 million.

For the basic aid category only, the total cost is adjusted by subtracting the distribution of sales tax revenue to the locality. For Spotsylvania, that would be $32.8 million, leaving a net basic aid cost of $129.1 million. That amount would then be allocated by the county’s composite index to determine the state share ($81.7 million). Similarly, the total costs calculated for each of the other SOQ categories would be allocated by using the composite index. The total of all the various SOQ accounts would be the total SOQ funding from the state for the county ($147.1 million).

Here is a picture of the SOQ funding methodology:

The composite index is the mechanism used to implement the constitutional directive to “apportion” the cost of SOQ programs between the state and localities. It is a measure of each locality’s financial resources relative to state average values and, as such, can be considered an indication of a locality’s ability to pay. In addition to being used to determine a locality’s matching amount for SOQ programs, it is also used to determine the state/local split on other direct aid to education programs.

Three factors are used to construct the composite index:

Following are the steps used in constructing the composite index: 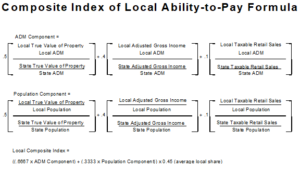 The five localities with the lowest composite index scores are:

The inclusion of several rural counties in the list of localities with the highest composite index scores may come as a surprise to some. To understand this result, one must keep in mind that the composite index is based on relative values.

The reasons for high composite indexes vary somewhat from county to county.  The tables below illustrate how the process plays out. 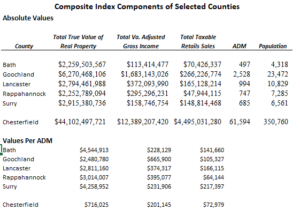 The first table lists the total true real property value, total adjusted gross income, taxable retail sales, and ADM in each of the five rural counties with a composite index of .8000. For comparison, Chesterfield County is also included. Its composite index, .3546, is the median value.

The second table shows the value of each component per ADM for each locality.  Thus, although the total value of real property in Chesterfield is almost 20 times higher than that in Bath County, the former locality has about 124 times the number of students.

The ratio of total property value per ADM is the most heavily weighted factor in the calculation of the composite index.  Close behind is the ratio of AGI per ADM. Due to a combination of high total property value as a result of being the home of significant taxable Dominion Energy facilities (Bath and Surry), extensive, expensive waterfront property (Lancaster), or large expensive rural estates (Goochland and Rappahannock); high AGI; and low, or relatively low, ADM, these rural counties are rated, along with Arlington, Alexandria, Falls Church, and Fairfax City, as having the highest ability of all Virginia localities to pay their share of SOQ costs.

The second largest component of SOQ funding, and of state funding of public education, in general, is the revenue collected from 1.375 cents of the sales tax levied by the state. The proposed budget bill for the 2022-2024 biennium includes an estimate of $1.7 billion in FY 2023 and $1.6 billion in FY 2024. Unlike other sources of funding, which are distributed based on ADM, revenue from 1.125 cents of the state sales tax is distributed by school-age population. The Appropriation Act treats these sales tax proceeds as part of the locality’s share of the cost of basic aid. Accordingly, after the total SOQ cost for basic aid is calculated for a locality, the projected distribution of sales tax revenues is deducted from that amount before the composite index is applied to determine the state and local shares of the cost. That action effectively reduces the amount of general fund appropriation the state must provide toward the SOQ cost.

Every two years the Department of Education updates the SOQ funding formula and the composite index. This “rebenchmarking” is a technical exercise. It does not change the components of the formulas, just the cost and enrollment figures that are entered into the formulas.

Most of the data elements are fixed for the biennium. These include the funded salary amounts and the initial fall membership and ADM data that are used in the SOQ model. (The actual distributions are based on the annual March ADM.)

The rebenchmarking is always one of the major drivers of the increases in the biennial budget bill. For the 2022-2024 biennium, DOE estimated the cost of rebenchmarking would be $153.8 million for FY 2023 and $177.2 million for FY 2024, a $331 million increase for the biennium, which the Governor included in his introduced budget. There were 31 separate items that were updated, some increases and some decreases, to arrive at the final figure. The most significant ones were related to enrollment increases and increases in salary costs. More details on rebenchmarking can be found here by clicking on the appropriate document for the Oct. 22, 2021, meeting.

The three localities that will experience the greatest increases in their composite indexes will be Greensville County, Powhatan County, and the city of Richmond. These increases can have a significant fiscal impact on a locality. For example, due primarily to significant increases in property values and AGI over the last two years, the composite index for the city of Richmond will increase by .0451. The city estimates that this increase will result in a loss of about $10 million annually in state revenue. That loss would be in addition to a $20 million reduction anticipated in SOQ funding due to a decline in student enrollment.

The table below lists all the SOQ “accounts” and their appropriations for each year of the upcoming biennium. 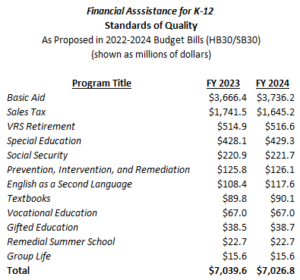 The main sources for this article were: