Respondents see COVID-related disruptions, economic contraction and geopolitical instability as the top challenges for the aviation sector in the coming year. But growth is expected, notably in Asia-Pacific and Australasia

The coming 12 months look to be challenging for the aviation sector once again. Most respondents expect to see further airline and leasing company consolidation. Indeed, 58 percent point to “significant” M&A-driven tie-ups during 2022, with a further 35 percent expecting “moderate” consolidation.

View full image: How do you expect the rate of M&A-driven airline and leasing company consolidation to change during 2022? (PDF)

Focusing on the global regions that respondents think are likely to see the fastest aviation sector growth in 2022, Asia-Pacific (excluding Australasia) stands out and is highlighted by a large majority (85 percent) of respondents. The region’s fundamentals are sound: Asia-Pacific’s burgeoning middle class and strong regional travel market are key factors, as is China’s growing influence in the region. “China wants to become the most influential economy in the region, and its Belt and Road Initiative will help the aviation sector in Asia,” says a partner at a South Korea–based private equity firm. Meanwhile, the United States’ new focus on the Indo-Pacific region under the Biden administration could provide further stimulus.

Ranking the other regions selected by respondents, Australasia and Africa take joint second place, each selected by 33 percent, followed by North America (26 percent). The Middle East, Europe and South America are the regions least likely to see the fastest aviation sector growth in the opinion of respondents, cited by 16 percent, 7 percent and 0 percent, respectively. 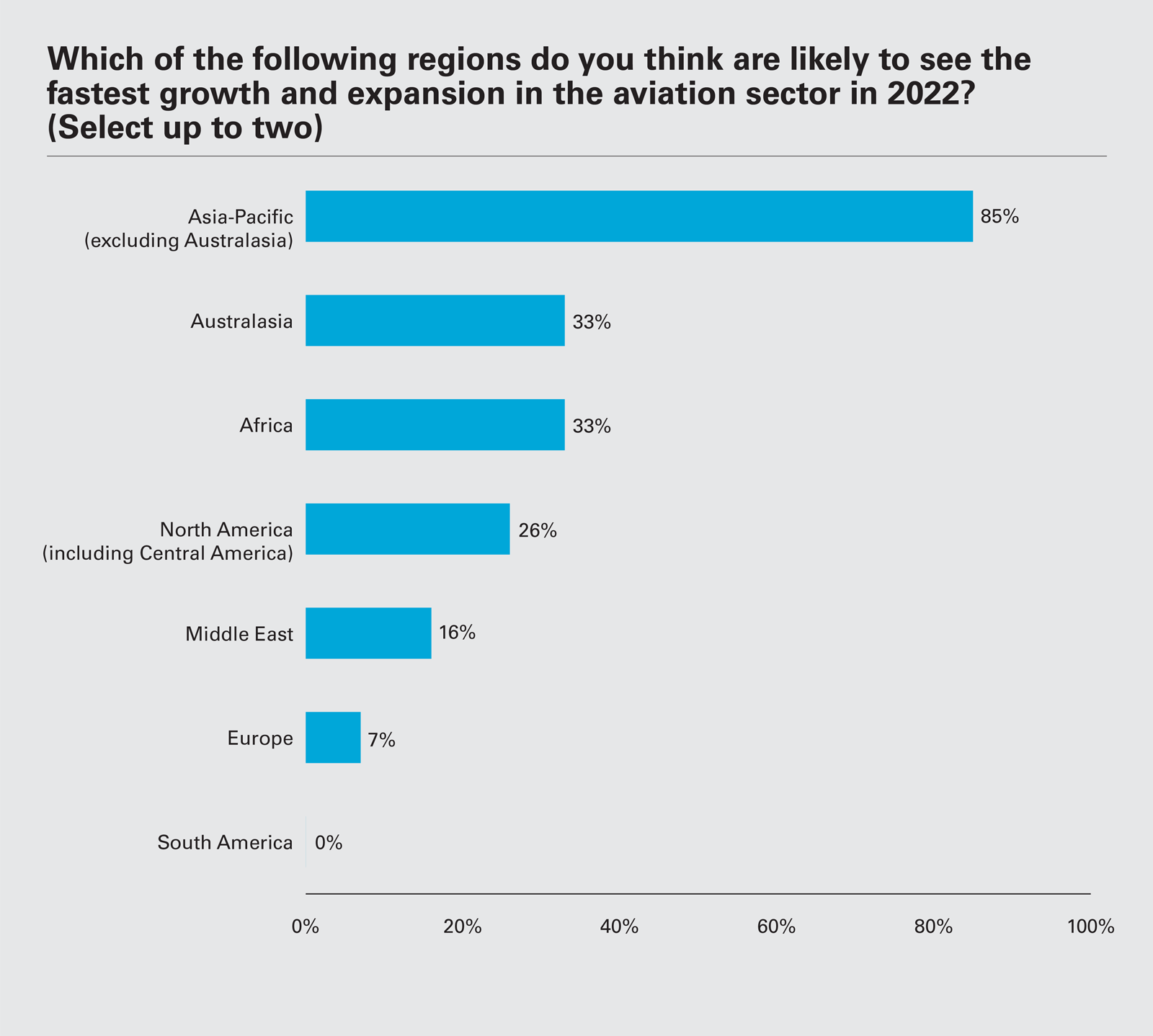 View full image: Which of the following regions do you think are likely to see the fastest growth and expansion in the aviation sector in 2022? (PDF) 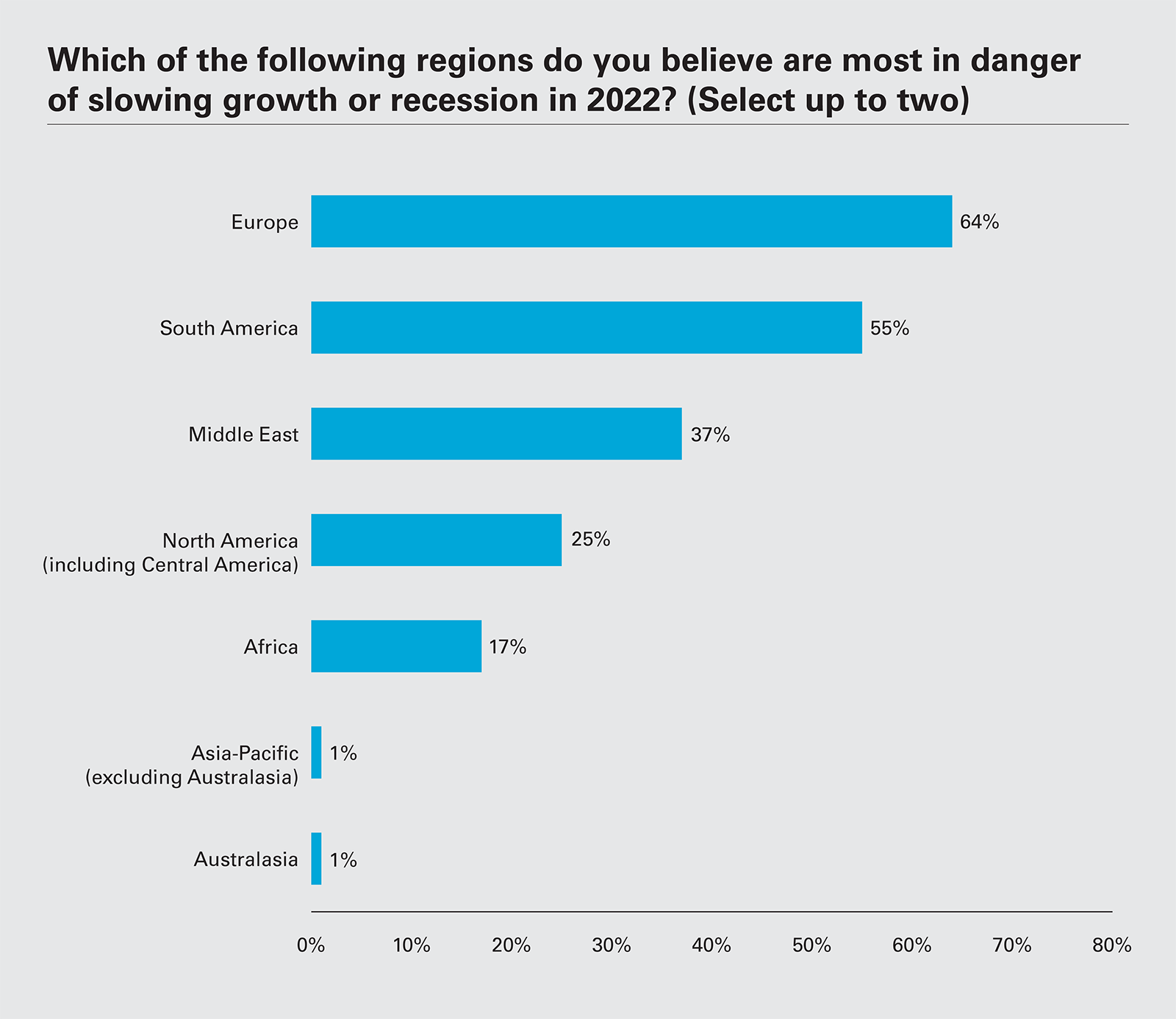 View full image: Which of the following regions do you believe are most in danger of slowing growth or recession in 2022? (PDF)

85 percent of respondents expect Asia-Pacific to see the fastest growth and expansion in the aviation sector in 2022.

Turning to the question of which regions are most in danger of slowing growth or recession in the year ahead, 64 percent of respondents point to Europe. This may not be surprising. While IMF data suggests the Euro area may see approximately 4.3 percent GDP growth in 2022, this is still some way behind emerging and developing Asia-Pacific (6.3 percent) and the United States (5.2 percent).1 Meanwhile, more than half of all respondents (55 percent) predict slowing growth in South America, where forecast GDP growth is 3 percent for the region in 2022 and just 1.5 percent for its struggling powerhouse economy, Brazil.

Delivery delays and suspended operations of certain types of aircraft continue to be a headache for many airline companies and lessors. Nearly three-quarters of respondents in these groups (74 percent) report negative impacts lasting weeks or months. COVID-related manufacturing bottlenecks are one of the principal reasons. The grounding of Boeing’s 737 Max was another factor—although the suspension was finally lifted in 2021. 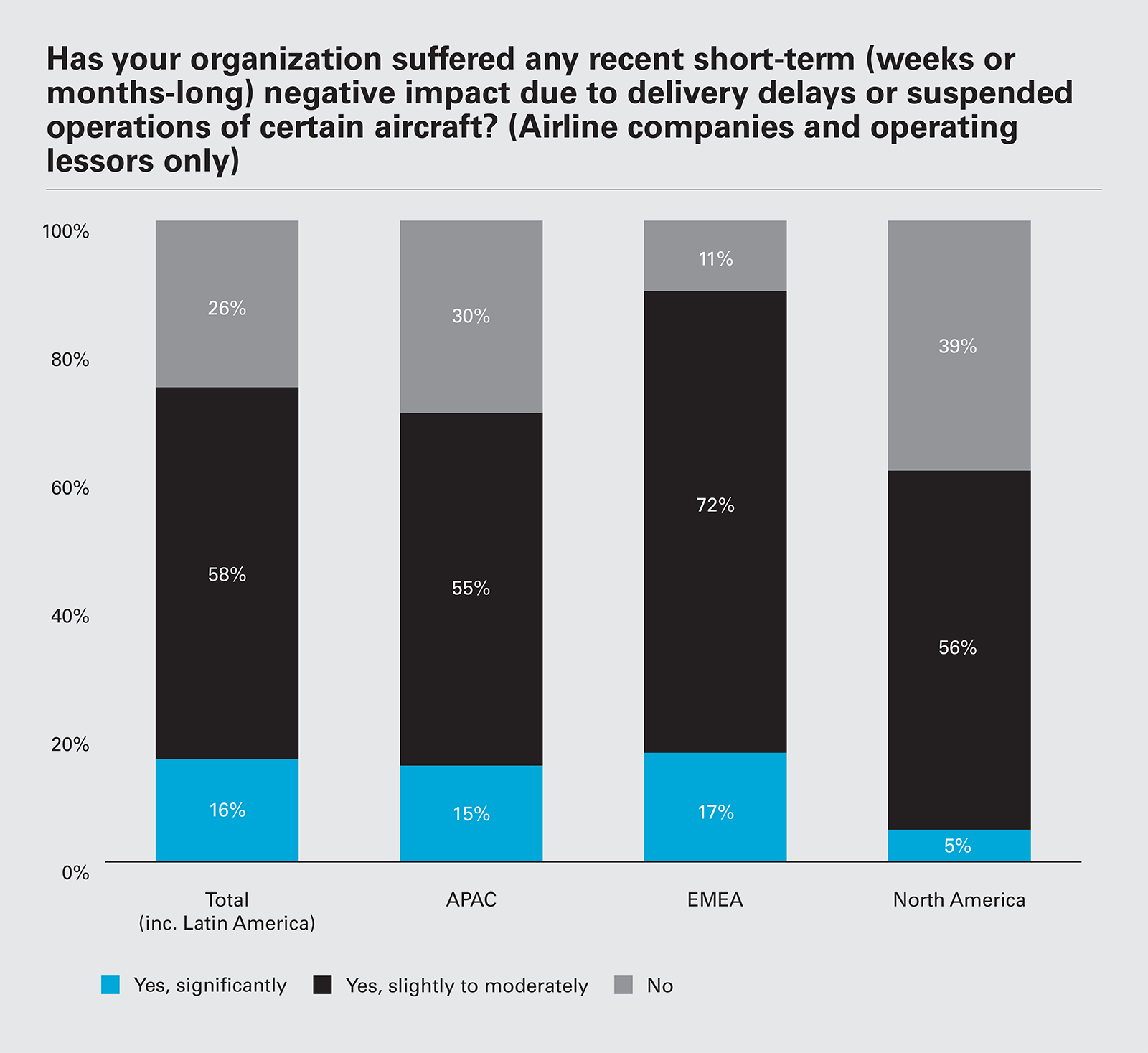 View full image: Has your organization suffered any recent short-term (weeks or months-long) negative impact due to delivery delays or suspended operations of certain aircraft? (PDF) 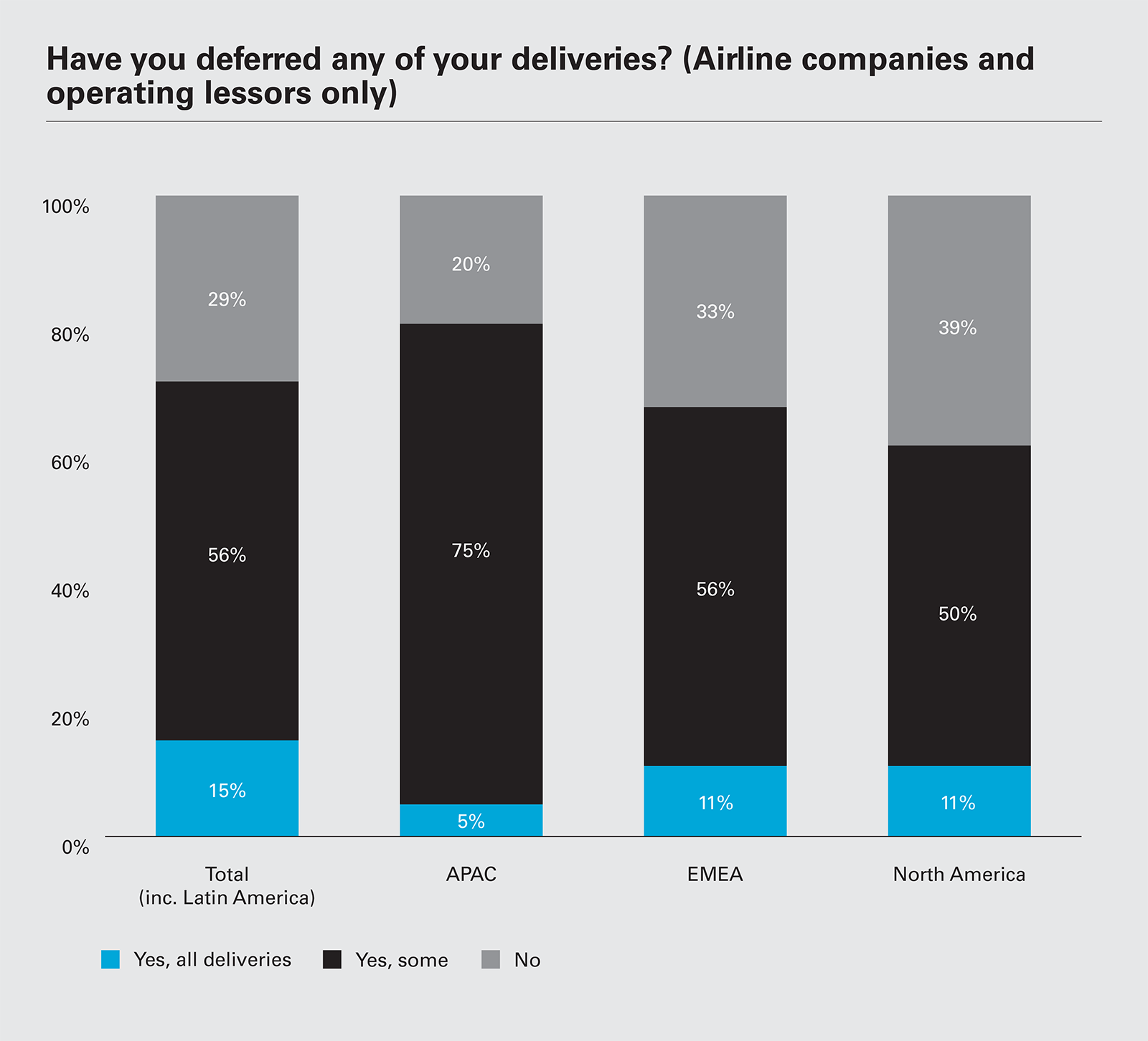 View full image: Have you deferred any of your deliveries? (PDF)

For airlines and lessors facing lackluster passenger demand, manufacturing hold-ups could act as a blessing in disguise—particularly for those with wide-body aircraft on order. Passenger traffic on the long-haul routes that depend on this type of aircraft has been the hardest hit by COVID-19. Demand for narrow-body aircraft for domestic and regional operations has been less affected. Globally, 71 percent of airlines and lessors have pushed back some or all of their deliveries, with 15 percent saying they had to defer all of them. APAC-based airlines and lessors are the most likely to defer (80 percent) and those in North America the least (61 percent).

Looking ahead, pandemic-related restrictions are predicted to be one of the greatest threats to profitability by 63 percent of airlines and 71 percent of ECAs over the next 12 to 18 months. “Travel restrictions are a huge hindrance for the business,” says the head of finance at a Malaysia-based airline. “Passenger numbers have dropped drastically, and this is the main point of concern.” 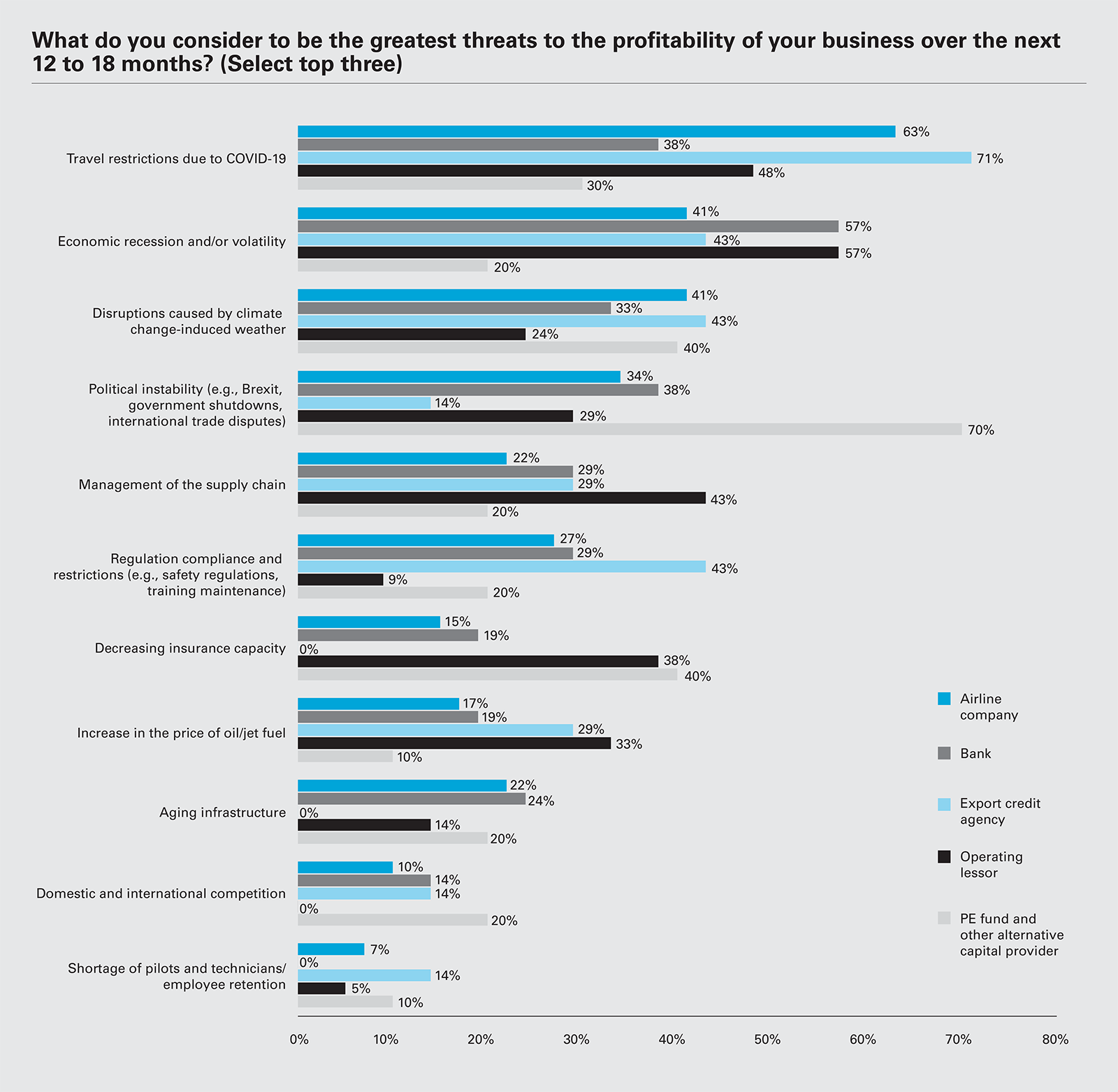 View full image: What do you consider to be the greatest threats to the profitability of your business over the next 12 to 18 months? (PDF)

Worries about the economy are also high on the agenda. These are the greatest concern by lessors and banks (both 57 percent), as they contemplate the threats of rising inflation and economic contraction. Against this background, some fear that new trade barriers may not be far away. “We can see the protectionist attitude of governments increasing,” says the CFO of an EMEA-based lessor.

Political instability is widely cited. A managing director at a US-based private equity firm says: “Political instability is something that we cannot predict. Flights might have to be stopped to certain regions if the problem worsens.” Meanwhile, European airlines are keeping a watchful eye on simmering tensions on Europe’s eastern fringe: “Some issues are cropping up and creating war-like situations,” warns the CFO of a Baltics-based airline. “In these conditions, investment decisions become tough.”

Aircraft numbers cannot easily be flexed. In addition, the considerable longevity of airplanes—25.1 years for passenger planes and 32.5 years for freighters—means that it is necessary to take a long view. “We cannot adjust or reduce the number of aircraft when there are temporary disruptions—especially when we do not know how long these disruptions will last,” says the head of finance at a UAE-based carrier. 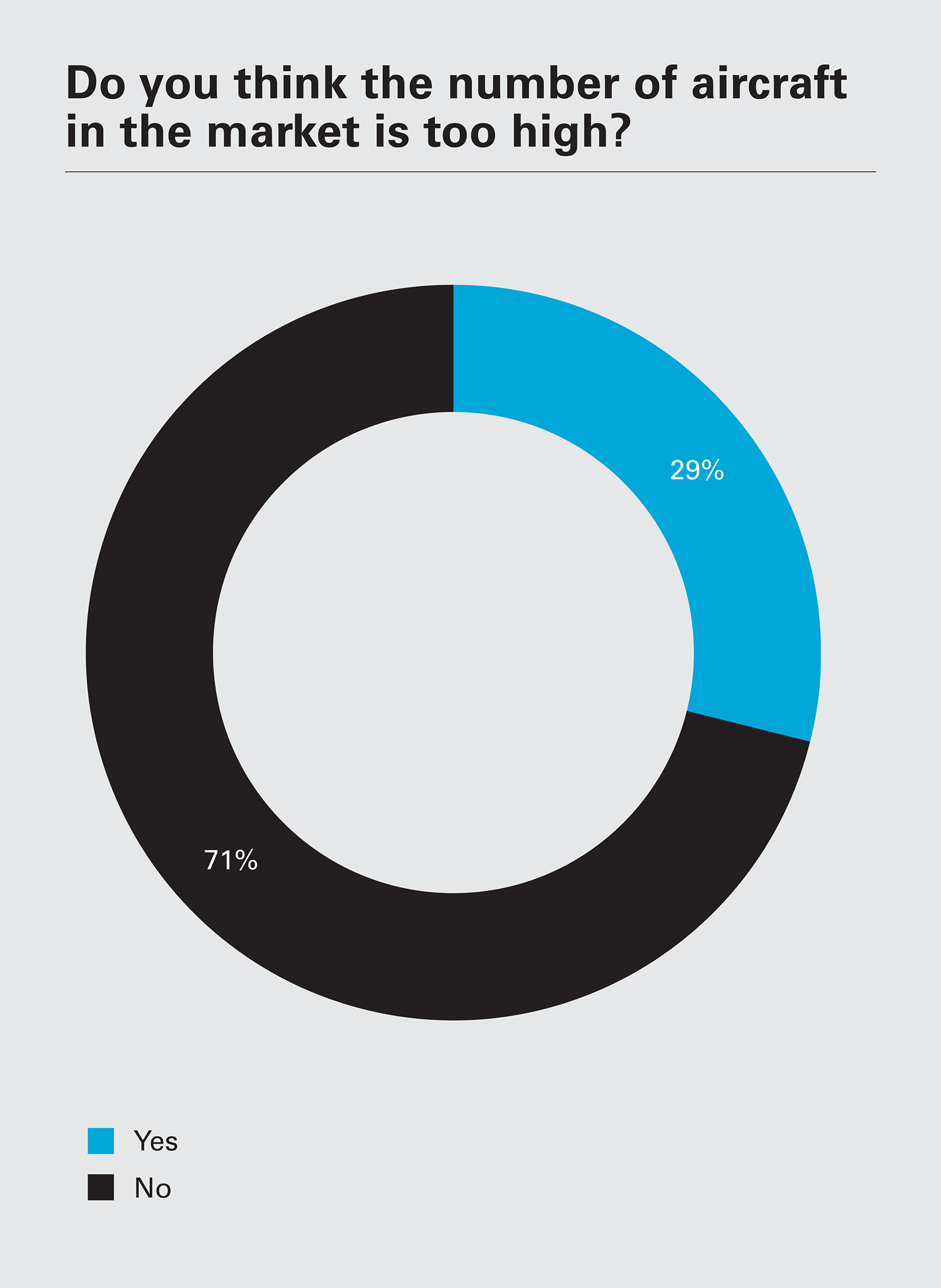 View full image: Do you think the number of aircraft in the market is too high? (PDF)

In terms of future financing, airline companies and operating lessors are divided on whether they see themselves accessing the JOL/JOLCO market in 2022. A large minority of respondents in these two groups (45 percent) anticipate doing this, but the remaining 55 percent say they either do not anticipate doing this or are unsure on the matter. 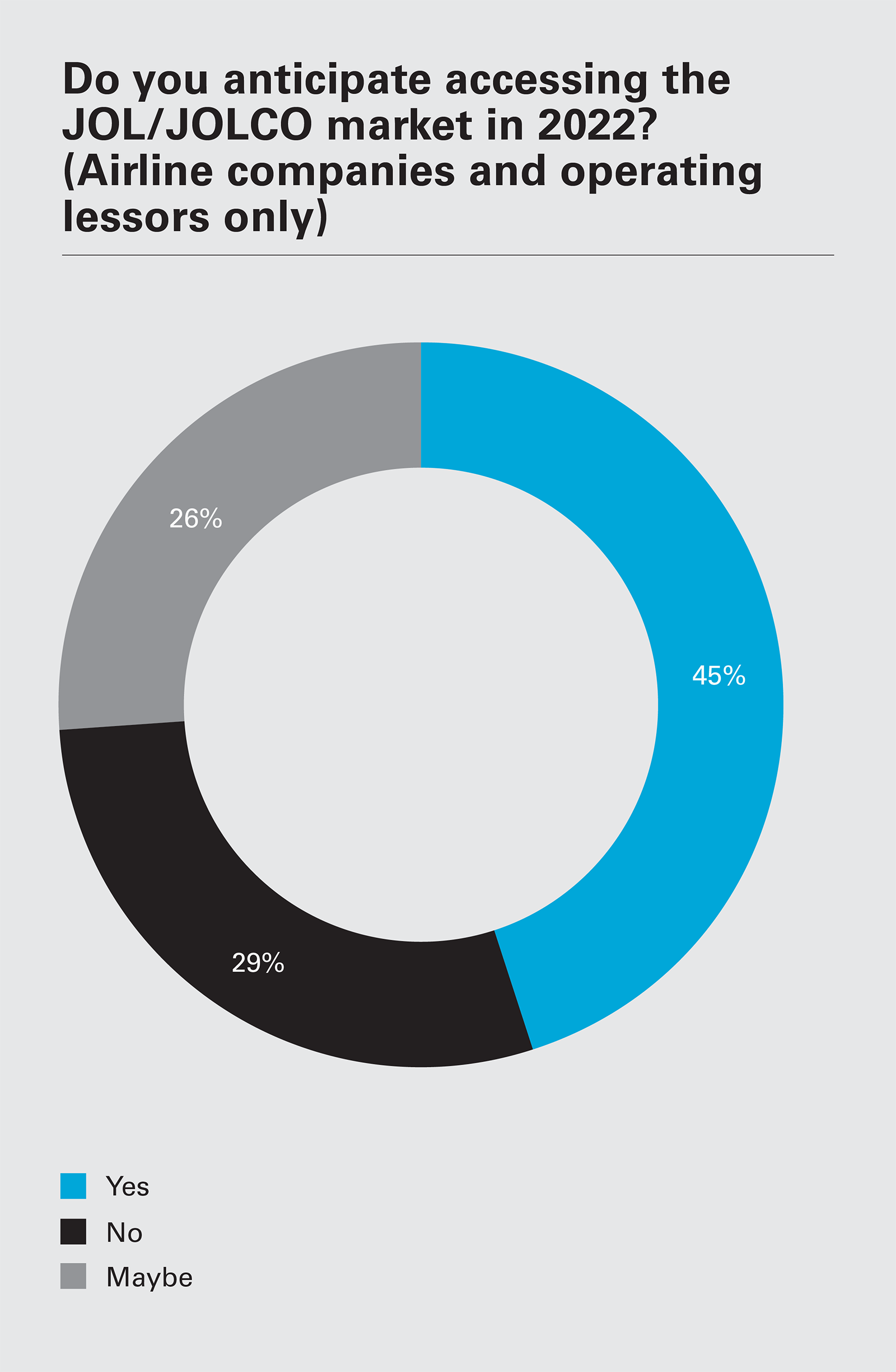 View full image: Do you anticipate accessing the JOL/JOLCO market in 2022? (PDF)

71 percent are using green bonds, and 70 percent are financing new equipment, as ways to align themselves with growing trends in energy transition and sustainability.

Navigating the immediate challenges is the focus for much of the sector. At the same time, there is a growing consensus that the industry needs to change—particularly when it comes to environmental performance and satisfying ESG criteria. At the same time, a growing proportion of institutional funding—including export credit agency sponsorship—now comes with green strings attached.

Aviation is the toughest mode of transport to decarbonize.

Nonetheless, a migration path is evolving. Measures include a shift to sustainable aviation fuel (SAF), smart air traffic control, improvements in aircraft efficiency, and the use of fixed electrical ground power (FEGP) to cut airport emissions. There is also growing interest in greener propulsion systems, including the use of hydrogen and electricity, although practical solutions for large-scale aviation are some distance away.

Our survey shows that seven in ten respondents view green bonds and the financing of new equipment as ways to align themselves with the growing trends in sustainability and aviation’s energy transition.

View full image: How does your organization seek to align with the growing trends in energy transition and sustainability? (PDF)

Green bonds are already being used to finance everything from fleet renewals to SAF research and sustainable airport buildings. The attractions are clear. “Green bonds are the best way to attract new investors,” says the Managing Director of a North America–based ECA. “There are domestic and foreign investors who regard green investments seriously, and they are not investing in companies that cause heavy damage to the environment.”

Financing new equipment (whether via bonds or otherwise) is also a key plank in most respondents’ ESG platforms. “Our main objective has been to finance new equipment and projects that are aligned to green initiatives and sustainability,” explains the head of finance at a Canada-based bank that invests up to US$1 billion per year in the aviation sector. “This has a positive impact on our image as well.”